That’s A Wrap: At Age 70, Diane Von Furstenberg Has Advice And Fashion For You 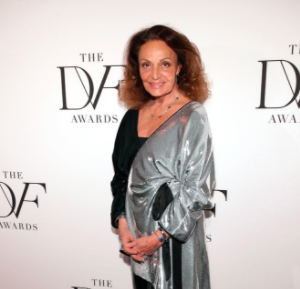 That’s A Wrap: At Age 70, Diane Von Furstenberg Has Advice And Fashion For You

Women who were in the work world in the early 70s almost inevitably owned the “wrap” dress- the iconic garment made by designer Diane Von Furstenberg, who championed the strength and vitality of working women then, and who continues to do so today, as she herself still works in the fashion world at the age of 70. As the daughter of Holocaust survivors, she grew up in Belgium and has had a rich and storied life, full of ups and downs, as she has pursued success and forged her own unique identity. You can read more about her biography and life’s work Here. Unlike some fashionable women, Von Furstenberg proudly claims her age, telling people “It’s an achievement!” Still vital and producing fashion forward designs, Von Furstenberg was featured in a New York Times video about her drive and creative process. So wrap yourself up, and Watch Here.