Out Of This World: The Fashion Forward Life of 97-Year-Old Pierre Cardin 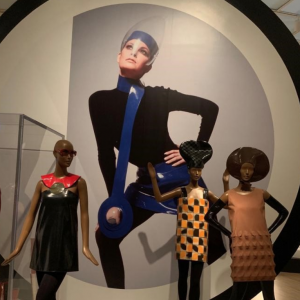 Out Of This World: The Fashion Forward Life of 97-Year-Old Pierre Cardin

You may know his name from sheets you bought at TJ Maxx, or maybe some accessory you picked up at Marshalls. But before he had arranged to have his name plastered on every conceivable item of clothing or home decor, Pierre Cardin was a fashion-forward leading Parisian clothing designer, responsible for both the “new look” of Christian Dior in the late 1940s as well as the modern, collarless suits worn by the Beatles in the early 1960s. And now his body of work and the story of his influence on style for decades has come together in a brand new exhibit at the Brooklyn Museum, entitled “Pierre Cardin: Future Fashion.” The exhibit runs through January 5, 2020, and contains hundreds of items from his private archive.

Known for his futuristic styles that included many geometric and sculptural elements, Cardin, who today at age 97 is still working, embraced the world of space travel and future worlds well before they were on the horizon for many. He founded his own fashion label in 1950 and dressed women as glamorous as Jackie Kennedy and Bridget Bardot. He once commented, “My favorite garment is the one I invent for a life that does not yet exist, the world of tomorrow.” He was also revolutionary in the men’s fashion world and in recognizing the value of licensing his name to other manufacturers (though he himself was a true designer with master tailoring skills). To find out more about Cardin’s career and creations, strap on your space helmet and take a look here. And to watch a brief video about his life and work, click here.