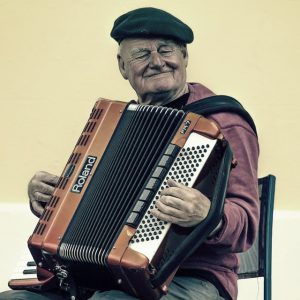 -Talking Point: The Benefits of Bilingualism

-Long In The Tooth: Taking Care Of Teeth As You Age

-In A Nutshell: One More Reason To Embrace The Mediterranean Diet

-Sleep On It: Time For That Post Lunch Nap

-Squeeze Box: Holding On To A Dying Neighborhood And Art Form

Ex-Cell-Ent: Healthy Cells Can Mean Healthy Aging: When a Nobel Prize winner in medicine tells you to pay attention to your cellular health, you need to listen. Dr. Elizabeth Blackburn, president of the prestigious Salk Institute and winner of the 2009 Nobel Prize for Medicine, is a pioneering researcher in telomeres, the caps at the end of our chromosomes that can shorten as we age, thus contributing to the arrival of various age-related diseases.  But Dr. Blackburn has discovered that in our own lives, with our own behavior, we can lengthen our telomeres and in the process, live longer and healthier.  Her new book, The Telomere Effect, co-written with health psychologist Elissa Epel, outlines the changes you can make in your life that really will make healthier aging a reality. Turns out nature and nurture work in tandem to keep you healthy. To learn more about this important new book, Read Here. And to listen to a fascinating radio interview with Drs. Blackburn and Epel, Listen Here.

Talking Point: The Benefits of Bilingualism: Perhaps you think you’re too old to learn a second language (although find out why that may be an aging “myth” by Reading Here). But for those of you who speak more than one language, or who have younger people in your life who are contemplating a second language, the good news is that Canadian researchers have discovered that those with years of bilingualism use their brain processes more efficiently. With this economical use of brain function, as well as the ability to avoid using the frontal regions of the brain, bilinguals may thus be better at staving off cognitive decline and dementia. So learn more about the value of bilingualism by Reading Here.

Long In The Tooth: Taking Care Of Teeth As You Age: For some of us, it’s a quick brush each day and that’s all the thought we give to our teeth.  But for those of us who have dental problems, you know how all-consuming and expensive serious dental work can be. Turns out that as we age, cavities, saliva issues, and gum disease can not only wreak havoc in our mouth but have wider implications for our general health.  It’s estimated that 40% of older adults have not seen a dentist in the last year. Don’t be one of them- get a check-up and while you’re at it, Check This Out.

In A Nutshell: One More Reason To Embrace The Mediterranean Diet: Still sticking to your new year’s diet resolutions? Well, there’s even more evidence to support the Mediterranean diet as your essential path to good health. While we’ve known for a long time that eating lots of fruits, veggies, olive oil, nuts, and beans is essential to a healthy heart and the avoidance of such other maladies as diabetes or stroke, a new observational study in the journal Neurology has now found an association between this diet and maintenance of brain volume.  As we age, the brain shrinks, which can affect learning and memory. But those who follow a Mediterranean diet were found to have significantly less shrinkage than those who did not. So chop those veggies, sprinkle on the olive oil, and Read Here.

Sleep On It: Time For That Post Lunch Nap: Have you ever felt tired after lunch and fought the good fight to avoid falling asleep?  Well, according to new research, you should abandon the fight and get into bed! It turns out that a post-lunchtime nap may be just what you need to stay mentally sharp as you age. In a new article published in the online journal of theAmerican Geriatrics Society, scientists from China and the United States determined that following a one hour post-lunch nap, older Chinese adults performed better on a variety of mental challenges than their counterparts who didn’t nap. So rather than power through, you may better off powering down. Read more about this study Here.

Squeeze Box: Holding On To A Dying Neighborhood And Art Form: For more than 50 years, 88 year old Alex Carozza has been plying his trade on West 48th Street in New York City as the country’s premier accordion repairman. But as neighborhoods come and go in New York, so too do its shopkeepers. After 5 decades, Mr. Carroza has had to move on, re-locating his shop to West 54th Street, thereby leaving little else to continue on the legendary 48th Street section known as “Music Row.” It’s a sad tale of gentrification and lost arts, yet Alex Carozza is an engaging older gentleman, with a twinkle in his eye and stories to tell after a long and successful career. Read about the last remains of Music Row Here and watch the delightful Mr. Carozza discuss his unique life’s calling Here.

THE LAST WORD: “We are all born ignorant, but one must work hard to remain stupid.”  Benjamin Franklin