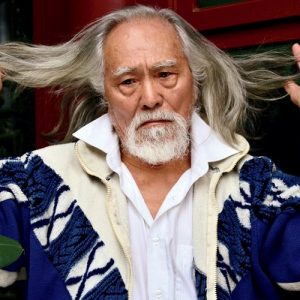 You’ve likely seen him shirtless, walking down the runway looking like a Confucian deity. Over the last year, video clips of 80-year-old Wang Deshun have ricocheted around the web at lightening speed, as he has become known world-wide as the “Hottest Grandpa.” Although he’s now visible as a striking image in men’s clothing advertisements and on Italian runways, Wang seemingly appeared out of nowhere to shame all older men and cause women of all ages to swoon. But, in fact, he’s had a long and at times difficult life in China, surviving the Cultural Revolution, creating censored art and using his body as an artistic tool well into his 80s. With the philosophy of wanting to “use himself up” until he reaches the end of his life, Wang represents a fascinating tale of re-invention as we age and how the improbable can become the possible if you put your mind, and body, to the task. Read this fascinating GQ profile of Wang Deshun Here.