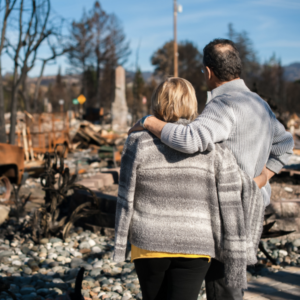 No matter where you live, you’ve likely now felt the effects. As The Washington Post recently reported, nearly 1 in 3 Americans experienced a weather disaster this summer and 64% of us live in a place that experienced a multi-day heatwave sometime in the last few months. It’s no longer a question of if or even when. We are now in the midst of a real climate crisis that not only poses threats to our children and grandchildren but even to us in the here and now. And while there is much that individuals can do to rethink our carbon footprint and make our homes more energy-efficient (see, for example, one Minnesotan’s recommendations for retrofitting your home for the new climate environment), the reality is that the biggest movers and shakers when it comes to climate action are corporations and governments. As Vox recently reported, 70% of the world’s carbon emissions since 1988 are due to corporate activities. So to make a real change (and experts suggest we need to cut carbon emissions by 50% before the end of this decade in order to avoid the worst of what may come) we need governments to facilitate or mandate the huge changes that are necessary.

What can be newly reported here is that efforts at activism and climate change enlightenment are now on the front burner of many older adults and senior citizen organizations. For starters, environmental activist and award-winning author Bill McKibben (himself 60 years old) has recently begun a new organization called Third Act. Realizing that it’s time to get those of us in the Baby Boom or Silent Generation off the sidelines and on the field to organize against climate change, McKibben invites you to join the thousands who have already signed on to work toward climate activism however you can. Akin to the movements, protests, and civil rights activism that many of us engaged in during our younger years, McKibben now wants you to recognize your role and responsibility to safeguard the future of the earth. To find out more, pick up your protest sign and click here.

Other organized groups of seniors involved in climate activism include Elders Climate Action, which is a project of the broader organization, Elders Action Network. Elders Climate Action is a non-partisan group aimed at using the demographic power of seniors to push for government policies to reduce greenhouse gases. It also has resources on its website for learning what an individual can do to combat climate change, reduce your carbon footprint, or start an activist chapter in your own neighborhood. The Elders Action Network even has a series of virtual workshops coming up to teach you about sustainable living.

In the meantime, given the situation, is there anything you can do right now or that you need to know? To start with, The New York Times has put together items that should be in your “Go” bag, in case you need to quickly evacuate due to a natural disaster, and items that should be in your “Stay” bin in case you wind up isolated at home without power, water or heat. The Washington Post also created some ideas of how to ensure your smartphone can get you through whatever disaster strikes your community. Finally, in case you’re wondering where you might be safe going forward? A new list of the top 10 regions of the country was just published by Quartz, which considers such factors as sea-level rise, heatwaves, and fires when determining where might be safe. Their recommendation? You may want to think about relocating to the Northeast, especially Vermont. For more advice, grab your “Go” bag and read here.