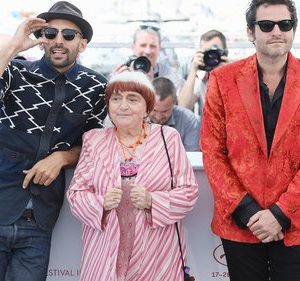 While she may not be well known to American audiences, 89-year-old Agnes Varda is a legend of French New Wave Cinema, every bit the equal to Truffaut or Godard. And, at age 89, with her eyes failing from macular degeneration and her memory beginning to falter, what has she done? Partnered with street artist JR, 55 years her junior, to make one of the most highly praised documentaries of the year. Faces Places (Visages Villages) tells the story of this unlikely pairing, traveling through the French countryside as they each use their own artistic instincts to highlight the quiet lives and dignity of unheralded French working people. Not only do their artistic styles- hers documentary film-making and his creating giant photographs to punctuate the landscape (he’s the artist behind the huge photo of the child peering down at the US border with Mexico)- mesh, but an unlikely devotion to each other and their intergenerational partnership is as much the result of the film as the movie itself. The film is now out in limited release and Varda will be honored with a Lifetime Achievement Award at the 2018 Oscars. Will they get an Oscar for this documentary? Could be. To learn more about the film and the friendship, listen to this NPR report Here.