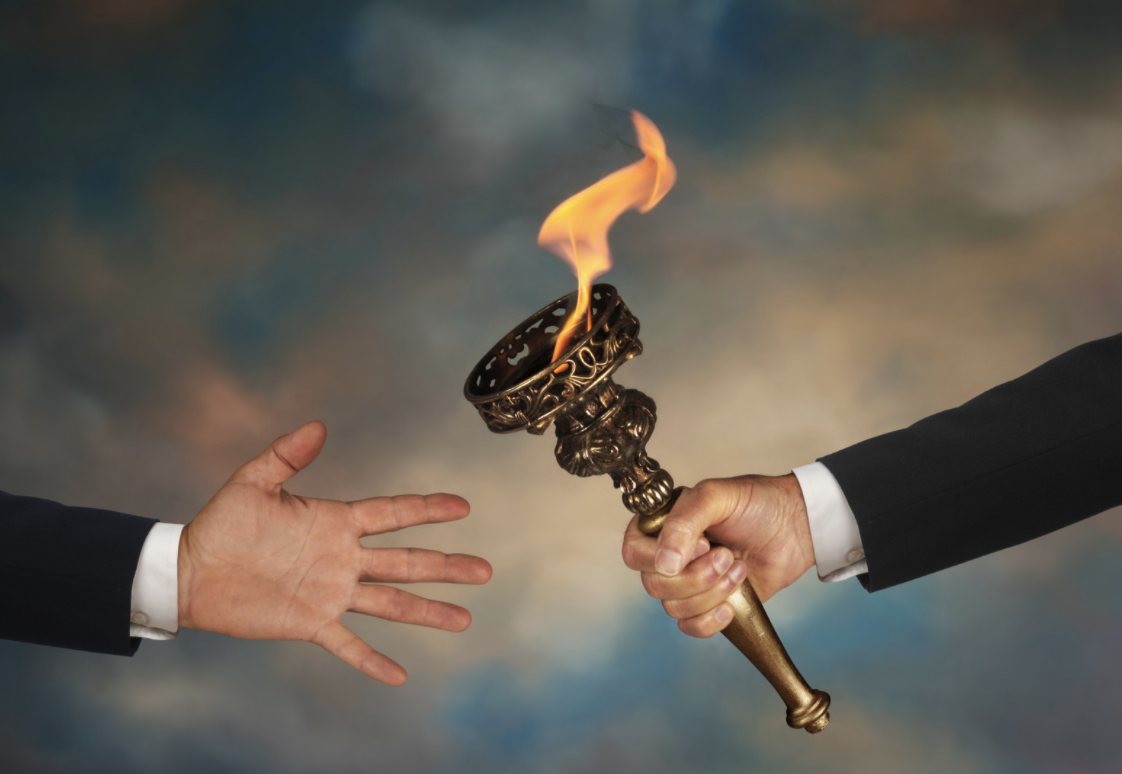 Been There, Done That: Eight Decades And Counting By Alice Herb: The Torch Is Passed

The Torch Is Passed

I can’t remember when I took over family holiday celebrations. My mother had always been a cheerful and efficient hostess and had parties at our house all the time. She was especially gracious in her entertaining when I was old enough to wash the dishes and clean up the kitchen. I was the angry, reluctant, and coerced helper! Remember pre-dishwasher days? But gradually and subtly – after I had my own home, at least the holidays became mine.

Thinking about that the other day I realized my son Peter now had taken it over.  I became acutely aware of the change when our Swedish cousins, a family of six, were coming to visit. All of us love this family and so we were enthusiastically looking forward to their arrival. But I didn’t have enough space.  Peter, who has a 3 bedroom apartment and whose daughter and son are currently out of state, offered it to them and he would stay with his partner. I was delighted at first, but I had every intention of being their host anyway. It wasn’t long before I realized that Peter had taken over. He began making plans, getting the apartment ready, buying food, and confirming arrivals. He even made dinner and baked so that when they arrived they could just unwind and have a quiet evening with us. Needless to say, it was a smashing success.

When I went to bed that night, I realized I had been a guest at what I had always considered my party, that Peter had done an outstanding job and that I was absolutely excused from any work detail. I could enjoy and not be exhausted.  The torch had clearly passed.

Did I mind?  Do I mind? I suppose both “yes” and “no.” It’s been happening for quite a while. I didn’t notice at first because I had stopped doing Thanksgiving when my older son, Ricky, died. It had been the last time that the whole family had been together and I couldn’t bear thinking about doing his favorite holiday knowing he wouldn’t be with us. Christmas had become a kind of scaled-down model of cold brunch/lunches and other holidays had been pared down to a shadow of their former selves. Most of that had to do with family issues, not my advancing age. But in the past couple of years, with the exception of Christmas (which remained mine), Peter has taken over whatever is celebrated. I guess at first I minded, although I wasn’t in the mood to plan, shop, cook, set the table, etc.  But I felt alternately hurt or bad. Maybe my family was telling me something. But Peter was so eager to take over that I ultimately acquiesced graciously and gratefully. I still provide some of my special dishes or supply the tablecloth and napkins. But I am no longer the center of activity

Now that doesn’t mean that I don’t entertain or that I am no longer the head of my household- but now I can admit that I no longer have the wherewithal to do a banquet. And that’s so with other activities as well.

It isn’t just the physical limitations. Recognizing my limitations came hard and is still ego bruising. I have been trying to clear out my home of all the stuff I no longer need. During an entire winter, I was unable to clear out even one room. No longer can I climb up the ladder and take the suitcases or storage boxes down. I also couldn’t bear to unearth what I knew I would find. To ease the sadness of recalling memories of those now gone and, more realistically, unable to do it anyway, I waited until my grandson was home from college to clean out the tops of my closets. Surprisingly my grandson loved helping.  It didn’t hurt that what he took down included at least 50 old T-shirts that were his late uncle’s, at least half of them being Grateful Dead shirts. And then he browsed through his late grandfather’s things that even included a lighter that is also a camera! He knows that someday when he has his own place, much of this will be his and he is thrilled.

But it upsets me to have to get the super to change a light bulb or to hire someone to help empty the bookshelves so I can have the place painted. I used to do all that myself. After all, I was widowed once at a very young age and then once again when I was 50. I didn’t have the money to hire people so I became a virtual one-armed paperhanger. That brings me to my beach house.

I’ve owned my beach house for close to 50 years. For years, I couldn’t afford to live in it during the season but I did a lot of hard work there to bring what was a handyman’s delight to an attractive rental, albeit with my second husband’s considerable help. Now I can afford to live in it but have a hard time realizing that I can no longer open the house in the Spring by myself. I even need help to clean it. I always have to remember that having a house near the ocean is like owning a boat. It’s a constant battle to keep the house free of salt, sand, and water.  Cleaning and maintaining are essentials. But keeping the house also requires that I keep my car.

The house is on a sandbar 50 miles from my home. Taking public transportation means subway, train, taxi, and ferry before I get to the island. That’s just too much trouble. I am still quite happy driving back and forth – of course also enabling grocery, hardware, or other shopping on the way. And I love driving. I have always loved cars and drove wherever I could. Now I hesitate to drive alone to visit my college roommate who lives a mere 135 miles away. That is really distressing but then I keep telling myself that I still can do a lot.

Travel is another issue. Having been widowed now for a long time – after all, with my history of being widowed twice, I wasn’t going to take another chance on marriage – I haven’t had a ready-to-go travel partner. I’ve traveled with a number of different friends, some more successfully than others. But I’ve also traveled by myself.  Now, if I don’t find a friend interested in the same places I am, I no longer feel it safe to go on my own. I don’t love tours but that is the only sensible decision.

Having reluctantly revealed my painful submission to aging, I have to admit, it’s not so shabby. I do get depressed now and then, particularly when I’ve spent too much time alone. Then I realize I’ve lost some but I’ve also gained the freedom not to do all those disagreeable chores, having found that my son, my grandchildren, and young friends will lend a hand. I found that out when I broke my arm some years ago. Physicians with whom I worked and who lived in my neighborhood cheerfully chauffeured me back and forth to work. It’s a blessing to learn that people care enough to help and it’s only proper to accept with pleasure and gratitude.

I hope to be able to be independent indefinitely, but I will cede ground, with grace I hope, and give up what I can no longer do well or safely as I continue to get older.