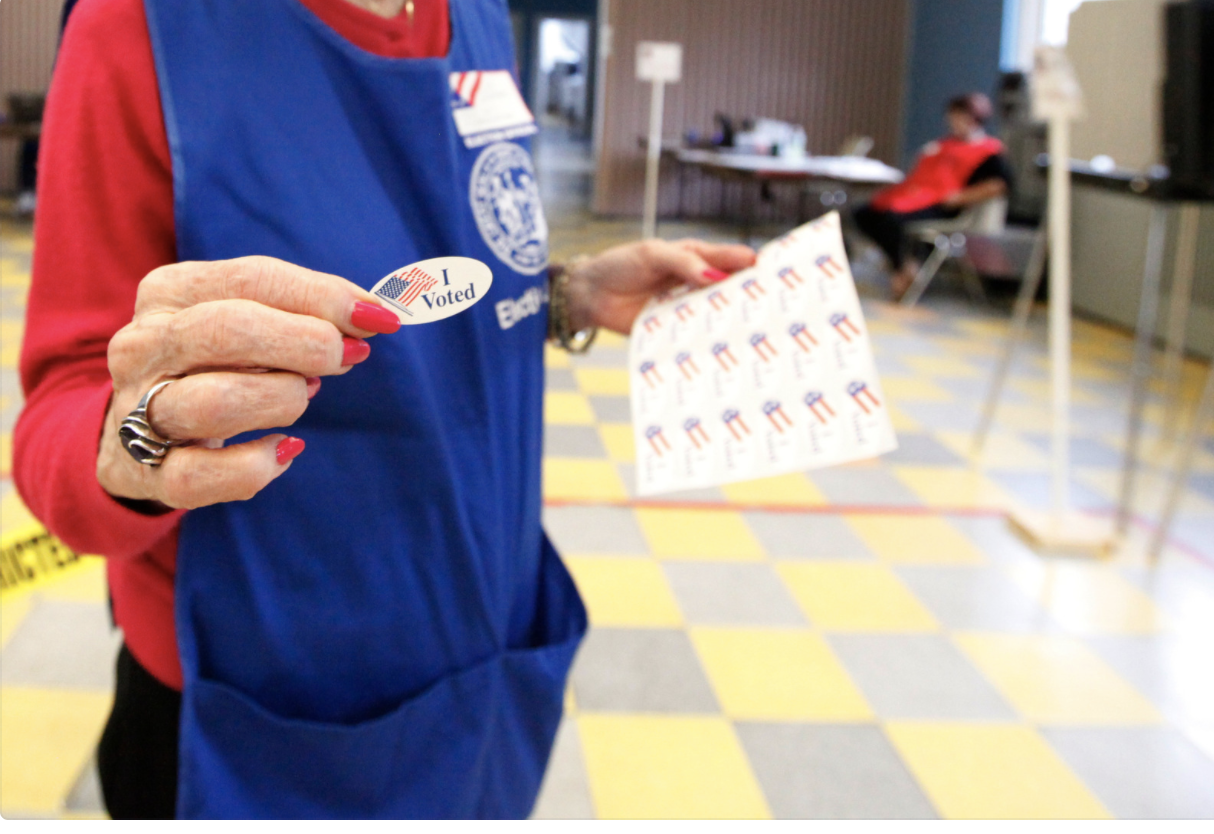 Been There, Done That: Eight Decades And Counting By Alice Herb: How I Spent Election Day

How I Spent Election Day By Alice Herb

Feeling increasing anxiety as I approached Election Day, I decided to volunteer as an Election Worker for two reasons. I thought that if I were busy all day on November 3rd, I could avoid the high tension of waiting for results. More importantly, I also wanted to find out how polling sites worked. And so I applied and was accepted. Although New York had 8 days of early voting, I was only assigned to work on the actual day of the election. I learned that I would start at 5:00 AM and work until 9:00 PM. With those hours I had second thoughts. Getting assigned to my own polling site a block and a half away from home was the only solution. But just calling the Board of Elections to arrange this became a job in itself. After many tries, an operator finally answered and connected me to the person who made the assignments, but the call went directly to an answering machine that would accept no more messages. After countless calls, I found out that if I called after 5:00 PM I would have a better chance of connecting. When I did finally reach the right person, she was most helpful and assured me that she would assign me as an Information Clerk at my local precinct, provided I completed and passed the training program. I did finish and pass. In due course, a card arrived in the mail providing me the information I would need when I arrived at the polling site.

The lead-up to the election was a challenge. I had to take an on-line training program that suggested that I download more than 100 pages of instructions- which I refused to do. I called the Board of Elections only to be told that no copies of the manual were on hand and to call back. When I did call back and finally got through there still were no hard copies available so I proceeded to work with the online copy. Three and a half hours later, after reading endless confusing details about carts containing the equipment and how to assemble and arrange the supplies, I took a brief test on what I learned (though was also told repeatedly not to memorize these details as the manual would be at my table). I successfully completed this grueling in-service and was given a certificate. However, the slides and the illustrations provided no real sense of what the actual assemblage and set-up would be. Nonetheless, I was now in the database and had received my assignment.

I arrived promptly at 5:00 AM with several other workers gathered in the school’s cafeteria. Within a short period of time, it became total pandemonium. Voting machines were rolling in while others brought in folding tables and chairs. The carts described in the manual were there and could be placed by specific identities. None of the coordinators or other election personnel knew where specific packets were for those of us having no carts. Having voted at this site for years, I knew where the information table was to be placed. Now I had to look around for the packets my partner and I needed to do our job. Luckily, after badgering several people, the material turned up in two different carts in separate areas.

The most disturbing part of our arrival was not the noise or confusion but that no personal protective equipment (PPE) had been provided, i.e. masks, sanitizers, alcohol wipes, gloves, etc. After asking the coordinator three times where the supplies were and threatening to leave unless I was protected, a shipment finally arrived. Signs had to be posted, decals with arrows had to be placed from the front door into the cafeteria, circles displaying 6 feet apart for voters to stand- all needed to be done while awaiting manuals and information books to be arranged on the tables. There were 5 of us at each table – two for information, one a Spanish interpreter, and two Mandarin interpreters.  All told, however, the interpreters had only one Spanish speaking voter asking for help (though apparently, Mandarin speakers live in the neighborhood). All of this had to be done before 6:00 AM (just one hour after arrival) when the polls opened – not nearly enough time to have everything in order.

Voters began streaming in. Miraculously, the various sections were now open and occupied. I do believe that it was the mostly young volunteers who were experienced with electronic equipment who made this into a functioning voting facility. At our table, we were able to help voters who did not know their correct sections by using our street guide. To my disbelief, the stream seemed to flow seamlessly through. The lines of voters continued until about 9:30 AM when the volume slackened a bit and we could come up for air.

As the day progressed, fewer and fewer voters came. We did take a lunch break but we all stuck to our post for the entire day. By the end of the day, the flow of voters trickled to just a few with only one voter in the last hour.

Here are my reflections on what went right and what went wrong on my watch:

– The volunteers were young, energetic, and capable of handling the flow of voters with little or no problem. They were terrific.

-The voters were to be commended as well. Every voter came in masked and eager to follow safety directives. As well, every one of the voters I encountered or watched coming in was pleasant, polite, and eager to vote. They were also largely young and happy to make their vote count.

-The lengthy training manual needs to be revised. It is too long, not well written, and needs better graphics, in addition to needing hands-on training (of course not possible during COVID.)

– As was pointed out in a recent New York Times story, The New York Board of Elections is a relic of the Tammany Hall machine and needs to be updated and cleaned out of political appointees, as my experience reinforced.

To sum up, the 50 states’ Election Boards are pivotal to smooth elections, as the past few days demonstrated. These agencies must be smart, up, and prepared. Yet notwithstanding my criticisms, even with antiquated equipment, the system worked in no small way because of the dedicated state Secretaries of State and their election officials who should be cited as the heroes of this election. And, I repeat, to the young, enthusiastic, well-educated volunteers and the voters’ ardent wish to exercise their rights. I am humbled by the sight of so many of the youngest voters taking their responsibility as citizens so seriously. And I must add that although this was a difficult task for me as an octogenarian, I am extremely grateful that I was able to do it and to come out perfectly fine!

The election outcome, although excruciatingly slow (yet peaceful and calm), pointed to a country that can withstand all kinds of challenges and will one day emerge again as forward-looking and a productive partner in world affairs. That’s why, with all its flaws, it is a country worth fighting for!