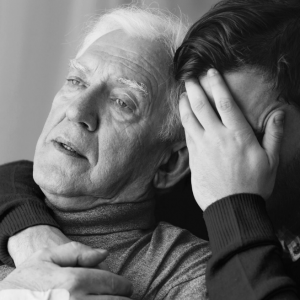 -Stop, In The Name Of Love: When To Be Concerned About Senior Driving

-Too Many,Too Few: China Faces The Biggest Aging Crisis Ever

-Action Hero: How To Combat The Risks Of Too Much Inactivity

-Food Fight: These Four Foods May Worsen Your Aging

-Mind The Gap: The US Lags Behind In Life Expectancy

-Modern Family: A Photo Essay Captures Caregiving At Both Ends of Life

Stop, In The Name Of Love: When To Be Concerned About Senior Driving: Maybe you’ve noticed these signs: a couple of new scrapes on the car, hesitation to drive to an unfamiliar place, or even a slower, more casual response when changing lanes or making a turn. Is there a senior driver in your life whose patterns fit these scenarios? While there is no specificage at which driving automatically becomes unmanageable, there are warning signs that should give you pause, and start a conversation, about whether or not continued driving makes sense.  Not sure whether or not it’s time to turn in the keys? Read This.

Too Many, Too Few: China Faces The Biggest Aging Crisis Ever: In a way unparalleled in world history, China is quickly facing up to what might be called an aging apocalypse. It’s “baby boom” generation is the world’s largest, and in just a few years, China will be faced with an enormous number of its citizens leaving the workforce while at the same time making unprecedented demands for health care, financial and social support. This crisis is further exacerbated by the effects of a generation of China’s one child policy: There are simply too few younger people to make up for the retiring workforce and to take on the increase in caregiving needs. All of this comes at a time when China is trying to push forward and expand its presence around the world.  To better understand the parameters of this epic societal battle, see the PBS and Atlantic Magazine report Here.

Action Hero: How To Combat The Risks of Too Much Inactivity: There’s no getting around it: Between sitting at the computer, watching TV or just our sedentary ways, physical inactivity has created an enormous public health problem worldwide. To combat this ever worsening trend, researchers have been trying to figure out what’s the minimum threshold of activity needed to reduce or even eliminate the serious morbidity and mortality risks associated with our slothfulness. A new study in the British journal The Lancet suggests a formula that’s reasonably easy to figure out. Curious about their recommendations? Stand up and Read This.

Food Fight: These Four Foods May Worsen Your Aging: You often read about the anti-aging properties of many foods and nutrients. But did you know that there are specific groups of foods considered to have the opposite effect? According to Dr. Erika Schwartz, a leading medical practitioner of preventive medicine, there are four specific groups of food to avoid so as to lessen the risk of inflammation, which is your immune system response when trying to fight off bacteria or disease.  As we age, Dr. Schwartz recommends we concentrate on an anti-inflammatory diet. What’s off the menu, according to this preventive medicine specialist?  To find out, Read This.

Mind The Gap: The US Lags Behind In Life Expectancy: In the current political climate, there’s lots of debate about America’s place in the world.  But by one measure, there’s really no debate: The US lags well behind other industrialized nations on the measure of life expectancy. Residents of countries including Spain, Italy, Japan and the UK all live longer than residents of the US. And to add to the frustration, part of the reason we lag behind is due to preventable deaths, from gun violence, drug overdoses and vehicular accidents. We also lag behind in infant mortality and health at age 60. Still think we’re Number One? Read This.

Modern Family: A Photo Essay Captures Caregiving At Both Ends Of Life: Josephine Sittenfeld and Thad Russell are not unlike many other young couples: rejoicing in the birth of their new children while also struggling with the demands of caring for aging parents. What’s unusual in their case is that both are professional photographers and on the faculty of the renowned Rhode Island School of Design. In a heartbreakingly beautiful photo essay for The New York Times, these two artists present the joys and sorrows that encompass family caregiving across the age spectrum. To view their photos and read about their caregiving journey, Read This.

THE LAST WORD: “Today is the oldest you’ve ever been, and the youngest you’ll ever be again,” Eleanor Roosevelt.